Seattle Sounders FC gets data science in the game with Oracle

Championship soccer teams need goal scorers and tough defenders, but these days they better have a couple of data scientists on the roster as well.

Today’s top professional sports teams have recognized that their data plays an essential role in building a competitive edge. “We know that analytics can help us increase player performance, optimize team performance, better manage our players’ health, and even improve our fans’ experience,” says Ravi Ramineni, vice president of soccer analytics and research for the Seattle Sounders FC. “Seattle Sounders FC aims to become a leader in the use of analytics within Major League Soccer and in world soccer.”

To achieve that goal, Ramineni and his data science team needed a faster, more powerful data science platform. Their vision was to develop new approaches to influence the team’s tactical strategies, style of play, players’ performance during live games, scouting, and more. To do so, they needed to be able to manage large volumes of data from many different sources and quickly run queries on these datasets to get instant, actionable insights for the coaches and scouting staff. However, an aging on-premises infrastructure was holding the team back.

One important dataset for the Sounders is very granular player tracking data supplied to teams by Major League Soccer (MLS). With measurements from every player on the field every 25 seconds, tracking data represents a few million rows of data for every match—multiplied by over 400 total MLS matches in a season. “Once we got the tracking data, we quickly realized that we would not be able to do what we wanted without building a new sports analytics infrastructure,” Ramineni says. “Our previous infrastructure just wasn’t built to handle this scale. It would take a few days to run certain queries, which was not viable for our decision-makers.”

The Sounders came to Oracle with two goals in mind: To upgrade the analytics infrastructure to get fast query responses on very large datasets, and to gain flexibility to scale up the analytics environment when needed and scale down to save money when it’s not.

Almost all sports now have huge datasets with unique characteristics. Investing in a secure, stable analytics and data science platform from Oracle Cloud Infrastructure will empower teams like ours to focus on what we’re good at: using our data to deliver more wins.

“We didn’t just want a database that was faster,” Ramineni says. “We also wanted a flexible data science platform that would let our data scientists do what they do best. With Oracle, we don’t have to worry about backend data infrastructure.”

The team evaluated the Oracle data aggregation capabilities, performance, and usability of Oracle Analytics Cloud and OCI Data Science. After the transition to Oracle, the Sounders were easily able to connect their data with minimal schema changes and found the data science tools to be straightforward to learn and use.

Another important goal for the team was to eliminate database management activities. “We do not have to worry about patching, updates, and other tasks,” Ramineni says. “With Oracle Autonomous Data Warehouse, all of that is taken care of for us.”

The Sounders sports analytics staff teamed up with Oracle data scientists to build a proof-of-concept machine learning model using player tracking data. “One of the primary reasons we chose Oracle was the genuine collaboration between us,” Ramineni says. “Both of our teams were really working for the other one, and we share a passion for using data to drive results on the field.”

The proof of concept allowed Ramineni and his team to build confidence in the Oracle technology and demonstrate real value to the coaching staff. Team analysts decided to build a data model for detecting line-breaking passes. Line-breaking passes go through a line of the opposing team’s formation, so they are more likely to set the team up for a score. “We chose this particular machine learning model because it is one that we always wanted to build and knew that we could use it as-is once the proof of concept was complete,” Ramineni says. 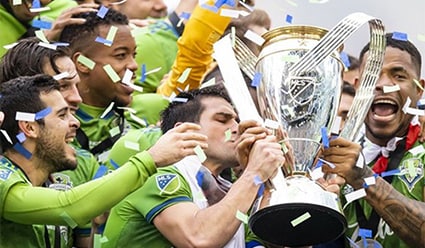 The line-breaking pass model helped Sounders FC scout and prepare for their opponents, delivering immediate benefits to the team. The Sounders used it to evaluate each team member’s playing style against each opponent and build more effective game strategies. The project wrapped up a few weeks before the team reached the 2020 MLS playoffs, and the Sounders heavily used the model during the team’s successful run to the MLS finals.

Because of COVID-19 travel limitations, the squad had played a limited number of opponents during the 2020 regular season. That meant the team faced many opponents during the playoffs for the first time that season, making sports analytics especially useful to the coaching staff during game preparation.

The Sounders have migrated all performance and sports science data into Oracle Autonomous Data Warehouse, including tracking data, event data, fitness data, and more. Ramineni and his team are now embarking on several high-impact projects.

For example, pattern detection will automate the identification of a player’s “pattern of play” using computer vision on video footage. It will also assess how often each pattern leads to goals scored.

Another project will detect when a player creates space from a defender, and quantify this space creation, so the team can develop new training tactics and game strategies. Also, by calculating goal threat probabilities, the team expects to better predict the likelihood of a goal being scored during the match over a given time window.

The organization also is saving money, thanks to the flexibility of paying for the cloud infrastructure only when it’s being used. In addition, IT staffers are saving time because they are freed from database administration tasks. “More importantly, we are empowered to do things that we just could not do with our previous infrastructure,” Ramineni says.

In the playoffs, we played three teams in a row that we hadn’t played during the regular season. It was really handy to be able to quicky analyze all 20 of their matches to see what types of spaces they attack and how they create their chances.