“Oracle Cloud is playing a key role in the outcome of every single Grand Prix that we've won this year, and every Grand Prix where we've achieved significant results.”

When Oracle Red Bull Racing driver Max Verstappen qualified in 10th position for the Hungarian Grand Prix in July 2022, the reigning Driver’s Champion knew he’d have to battle his way through the field to even come close to a podium finish. But Verstappen and the team didn’t settle for just moving up a few places. They meticulously calculated an aggressive race strategy, and on a track that’s notoriously tough for overtakes, Verstappen won by nearly eight seconds and matched the team’s best-ever recovery win. 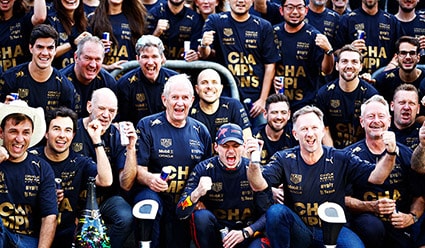 The Hungary race epitomized the combination of tech-powered strategy, teamwork, and superb driving by Verstappen and driver Sergio Pérez that was a hallmark of the Oracle Red Bull Racing 2022 season. It helped the team earn the Constructors’ World Championship, the sport’s top team prize, as well as defending Verstappen’s Driver’s World Championship. The team has a close technology partnership with Oracle, including running billions of Monte Carlo simulations using Oracle Cloud Infrastructure (OCI) to explore the different scenarios and outcome probabilities before and during every Grand Prix.

“Due to all the simulations before the race even starts, it's very easy to adapt a different strategy during the race because everything is there, everything is prepared,” Verstappen says. “I think we definitely had a strategy edge over other teams.”

Earning both of the top F1 trophies is no small feat, and it illustrates the team’s innovation and its embrace of data and technology to drive results. In addition to simulations for on-the-track action, Oracle technology supports Oracle Red Bull Racing’s launch of The Paddock fan engagement platform and the early stages of Red Bull Powertrain’s development of a new race engine, due to debut in 2026.

“It's been an incredible season, so many highs, so many amazing performances,” says Christian Horner, team principal and CEO for Oracle Red Bull Racing. “As a team, we’ve really delivered on and off the track this season, and that relies very heavily on the technology partners that play a key role in this championship success.”

Due to all the simulations before the race even starts, it's very easy to adapt a different strategy during the race because everything is there, everything is prepared. I think we definitely had a strategy edge over other teams.

Though the 2022 season eventually delivered championships and records, Oracle Red Bull Racing faced serious setbacks along the way. Early in the season, the first iterations of the Red Bull RB18 racecar were heavier and more difficult to drive, as all the F1 teams adapted to new regulations set by the Fédération Internationale de l'Automobile that completely revamped car designs for 2022. In the F1 season opener at the Bahrain International Circuit, technical issues late in the race forced Verstappen and Pérez to retire short of the finish. Verstappen would have another “did not finish” two races later, in Australia, giving him no points in two of the first three races of his title defense. The team never blinked and pulled together to make corrections.

“Everyone is of course very upset when things go wrong, but also very quickly we focus on what we have to improve on,” Verstappen says. “And everyone is super motivated. Even when we have a tough weekend, we of course take it in but then we’re immediately looking forward to the next one.”

On the backend, Oracle Red Bull Racing relies on OCI as the engine of its strategy operations. In much the same way supply chain operations run Monte Carlo simulations to spot bottleneck risks, or Wall Street investors use them to model portfolio risk, the team uses OCI—both before the race and in real time as events unfold—to run simulations that gauge the probability of maximum point totals from various strategy choices, such as when to pit and what tires to use.

Tapping OCI’s low cost and high performance, the team’s strategists ran about four billion simulations during each race—meaning millions of simulations each second—throughout the 2022 season. The team used Oracle Container Engine for Kubernetes to containerize its simulation applications, and then run those models using high-performing Ampere CPUs on OCI. The team’s tech operations strategy is similar to that being adopted across industries—using the automation of cloud-managed Kubernetes to pair the right processing power underneath for each workload type. For Oracle Red Bull Racing, having access to this high volume of simulations makes the team’s strategy calls more detailed and increases the confidence level.

“Working with Oracle Cloud enables us to make informed decisions in the spur of the moment, react quickly, and adapt to what our competitors are doing within a race,” Horner says. “Oracle Cloud is playing a key role in the outcome of every single Grand Prix that we've won this year, and every Grand Prix where we've achieved significant results, which have broken all our records this season.” The 25-year-old Verstappen set a new record for most wins in a season in 2022.

Even amid so many memorable races, Verstappen’s success on the Hungaroring track in Hungary stood out as a showcase of his skill and poise, as well as how much confidence the drivers and team have in their strategy, which is led by head of race strategy Will Courtenay or principal strategy engineer Hannah Schmitz on the racetrack’s pit wall.

“In Hungary, it was all about just being patient and choosing the right time to pit and on the right tires,” says Verstappen. “Due to strategy, we moved our way forward, relied on what we thought was right, and that's how we ended up winning the race.”

Innovating the fan experience and the business of racing

For Oracle Red Bull Racing, the focus on technical innovation extends well beyond the grid. Using Oracle CrowdTwist Loyalty and Engagement, the team launched The Red Bull Racing Paddock, a platform that lets fans earn points to gain access to exclusive merchandise and digital downloads. Since its launch, The Red Bull Racing Paddock has grown its loyalty membership by more than 950%. The team has continued to add capabilities and content that keep fans engaged between races and during the off season.

“It's hugely important to stay at the cutting edge of innovation as a team, and particularly with our fan base, which is ever growing,” says Horner. “With initiatives that we've introduced like The Paddock—enabling our fans to get closer to the action, to the information, to the engagement with the team—it’s giving us the ability to know who our fans are. It’s something that we take incredibly seriously, interacting with the lifeblood of our team, which is of course the fans.”

Looking ahead, the team has committed to a goal that may be every bit as tough as winning another championship: Designing and manufacturing its own race engines. Such a move would’ve been unthinkable even a few years ago for a company not already in the automotive industry, but cloud-based access to high-performance computing resources has helped changed what’s possible for such sophisticated engineering. So when Honda decided to no longer develop F1 engines, Oracle Red Bull Racing took the bold decision to develop its own engine by the 2026 season. “We've recruited the talent, we've got the infrastructure, and very importantly, we have the tools,” Horner says.

Cloud infrastructure levels the playing field for companies that need computing power for advanced engineering such as computational fluid dynamics (CFD) calculations. Designers of products from cars to coffeemakers to electronics use CFD tools during development, but it’s traditionally required massive investment in on-premises data centers, for technology that might only be used sporadically. OCI let Oracle Red Bull Racing engineers get up and running immediately on CFD-capable computing, with no overhead when that capacity isn’t in use.

“The speed that we operate at is so fast, and that's where Oracle’s cloud technology has really enabled us—not having to wait for a data center to be built on site has let us go from a clean sheet of paper to having an engine up and running within a 12-month period,” Horner says.

On another front, Oracle Red Bull Racing also participates in the F1 Esports Series Pro Championship, which sees the world’s best sim racers competing for drivers and team championships. Oracle Red Bull Racing relies on OCI for processing real-time telemetry data from the simulated races, ingesting up to 130,000 data points a second during an Esports race. This data can be used in artificial intelligence and machine learning models to optimize team and driver performance.

Separately from the F1 team, Red Bull Advanced Technologies is working with Oracle AI experts on ways to use AI running on OCI to help train the next generation of drivers.

“Our first season as Oracle Red Bull Racing has been a phenomenal journey,” says Horner. “We've benefited hugely from Oracle's technology, whether it's on the pit wall, designing a new engine, or engaging with our fans. Across all spectrums of the business, it's been an incredibly rewarding year on and off the track working with Oracle.”